A brief introduction to our plum, damson, bullace and cherry varieties 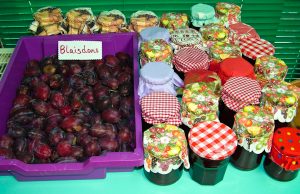 Plums and particularly damsons and bullaces were also to be found in hedges and woods. A small trade developed in the villages along the Severn, from where they were shipped to industrial South Wales,

A cut in tax and growth in sugar production in the colonies resulted in Britain in the 1850/60s having probably the cheapest sugar in the World. This encouraged the production of jam, the Blaisdon Red, and Yellow Egg plum found in woods and hedges in the Severn Vale met this demand.

On 10th February 1619 a dispute was heard in the Bishop’s Court between the vicar of Hartpury and Richard Nelme concerning the latter’s refusal to pay tithe on £4 worth of cherries. £4 in 1619 = £750 today, so evidently cherries were a significant crop at that time

Heritage collections of plums, cherries and damsons are being planted in GOT’s Longney orchards to ensure these old varieties saved for future generations.

Heg Peg Dump was a popular dish in Gloucestershire, made with suet and plums/damsons and served on St Margaret’s Day (20th July). 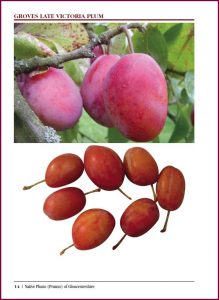 Charles Martell’s book Native Plums of Gloucestershire was published in spring 2018. It describes the stone fruit of Gloucestershire, discusses what is meant by the names plum, bullace, pruin and damson and when and how they arrived in our countryside and considers the Shadow Orchard and the emergence of fruit into the managed orchard. It complements our other books (also by Charles) on Gloucestershire’s Apples and Pears. Details of all these are available on the bookshop page of our main website.

Status codes and notes on names

This is our Fruit Varieties website, full of information on the traditional varieties found in Gloucestershire Orchards. For our general website, with lots on information about what we do and how could you be involved, please click here or click the content links below:

GOT is publishing a series of books on our historic local fruit varieties.  Volumes available so far include

For details of these and how to buy them visit our shop page.